What are CCVAs? | How are CCVAs used here? | Additional Resources | References

Climate Change Vulnerability is defined by the IPCC as the susceptibility of a species, system or resource to the negative effects of climate change and other stressors, and includes three components: exposure, sensitivity, and adaptive capacity:

What are Climate Change Vulnerability Assessments?

Climate Change Vulnerability Assessments (CCVAs) are emerging tools that can be used as an initial step in the adaptation planning process. A CCVA focuses on species, habitats, or systems of interest, and helps identify the greatest risks to them from climate change impacts. A CCVA identifies factors that contribute to vulnerability, which can include both the direct and indirect effects of climate change, as well as non-climate stressors (e.g., land use change, habitat fragmentation, pollution, and invasive species?).

The process of completing a CCVA includes the synthesis of existing information about the target species or system, confidence levels in those data, and identification of knowledge gaps. A CCVA combines this background information with climate projections to identify the specific elements of exposure, sensitivity, and adaptive capacity that contribute to the overall vulnerability of the species or system. 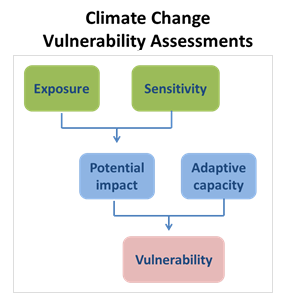 There is no standard method or framework to conduct a CCVA, and a variety of methods are being implemented at government, institutional, and organizational levels. Because of this, interpretation of CCVA results should carefully consider whether and how each of the three components of vulnerability (exposure, sensitivity, and adaptive capacity) were evaluated, if non-climate stressors were included in the assessment, how uncertainty is presented, the geographic location covered by the assessment, and whether the entire life cycle of a target species was evaluated, particularly for those that are migratory. Generally, the approach chosen should be based on the goals of practitioners, confidence in existing data and information, and the resources available (e.g., financial, personnel).

Some of the most common frameworks applied regionally are:

Outputs from the CCVAs outlined above compare the relative vulnerability among species or systems and identify major factors contributing to the vulnerability, confidence in the factors assessed, and remaining knowledge gaps. This information can inform adaptation strategies and actions by identifying the areas where additional monitoring and research is needed, and helping to prioritize management and policy decisions.

How are CCVAs presented in the Massachusetts Wildlife Climate Action Tool?

The CCVAs presented in this tool are drawn from assessments completed throughout the Northeast United States, as well as the Midwest and Mid-Atlantic regions. The NatureServe Climate Change Vulnerability Index was the most common method of assessing species vulnerability, though other methods were also included (see descriptions above).  The Massachusetts Climate Action Tool presents a summary of CCVA results for individual species and forest habitats; in cases where more than one CCVA result is offered, studies come from various locations and may have used different assessment methodologies. Users should consult the original source for a complete understanding of how vulnerability was assessed and detailed results.

We present multiple Climate Change Vulnerability Assessment (CCVA) results because not all species were assessed specifically in Massachusetts. For example, an assessment may have included Massachusetts, but been regional in scope. Because species' ranges and life histories extend beyond state boundaries, assessments conducted in other areas may provide a more comprehensive understanding of their vulnerability. We suggest starting with CCVAs that include Massachusetts (e.g., North Atlantic LCC, North Atlantic coast), and then comparing results from nearby states. We also suggest considering the life history and migration patterns of species to determine what factors might be most influential as the species moves in or out of Massachusetts. In some cases, CCVA rankings may vary for the same species because of unique factors within a given area, or because different methodologies were used in different studies. It is important to read the expert opinions supporting ranking to understand why a ranking differs from one state to another.

In the Massachusetts Climate Action Tool, the following information is presented for each species assessed:

Confidence: This category describes how confident the authors are in the vulnerability ranking assigned to each species in the assessment. Confidence scores refer to the amount and quality of the available background information on that species, and do not necessarily include the uncertainty associated with the projected climate data used for rankings.

Emission Scenarios: Emissions scenarios describe future releases of greenhouse gases, aerosols, and other pollutants into the atmosphere, and are based on expected changes in human populations and technology. See climate change page for more information on emission scenarios and climate models.

Time Period: Vulnerability for each species is considered for a specific time period. Many vulnerability assessments consider the current and future impacts that a species may experience through the years 2050, 2080, or 2100.

Location: This field refers to the geographic region considered in the vulnerability assessment. CCVAs can be conducted on local, regional, state, and national levels. 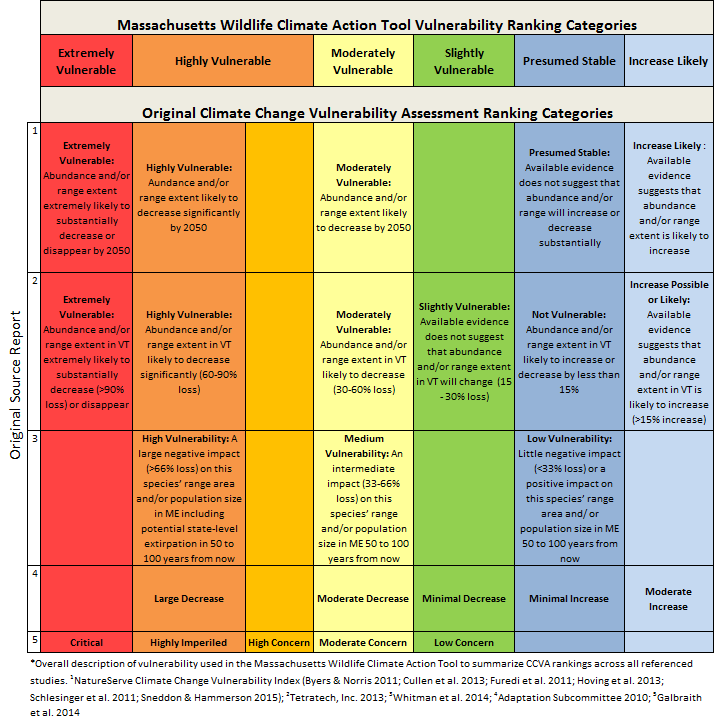 Climate Registry for the Assessment of Vulnerability (CRAVe): The Climate Registry for the Assessment of Vulnerability (CRAVe) is a searchable, public registry on CCVAs.  The purpose of CRAVe is to make information about ongoing and completed vulnerability assessments readily accessible. CRAVe is hosted in two locations: 1) USGS National Climate Change and Wildlife Science Center and 2) the EcoAdapt Climate Adaptation Knowledge Exchange. The assessments in CRAVe include studies on species and ecosystems, built environments and infrastructure, cultural resources, and socioeconomic systems.  Users can access CRAVe to conduct searches across all vulnerability assessments to find the information necessary for decision making.