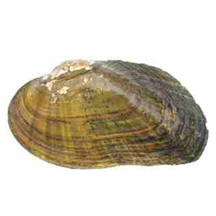 Freshwater mollusks generally include mussels, clams, and some snails. Freshwater mollusks are typically small in size, and can be difficult to identify the species. These invertebrate animals all have hard protective shells made of calcium carbonate and some form of organic material 1. Freshwater mussels depend on fish as hosts to complete their life cycles 1. The parasitic eggs of freshwater mussels attach to the gills, fins, or body of fish and use their host for protection as they grow as well as for dispersal to other aquatic habitats. Many species will not survive if they do not encounter the exact fish species they associate with. Freshwater mollusks have experienced large population declines due to habitat loss and poor water quality conditions in many of their stream and river habitats. They are one of the most threatened species groups in the United States 1.