These forest types are from The Nature Conservancy's Terrestrial Habitat Classification data.

These forest types are from... 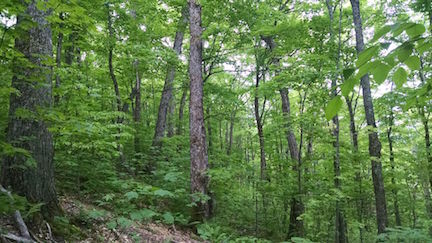 Sugar maple is a common component of northern hardwood forests. In general, climate change is predicted to make Massachusetts less suitable for sugar maple. However, the individual site characteristics of a forest play a large role in determining its competitiveness in that forest. Cooler, moister sites, such as you would find on north-facing slopes, are likely to continue to provide appropriate conditions for sugar maple growth and reproduction in the future.

Projected Suitable Habitat for Common Tree Species:
Projected change in suitable habitat in the year 2100 based on Tree Atlas projections for a given Ecological Subsection. Values in parentheses indicate whether suitable habitat for species will increase (+), decrease (-), or stay the same (0) under projected climate change. The first value corresponds to a lower emissions (PCMB1) scenario whereas the second value is based on a high emissions scenario (GFDLA1FI). Management efforts should target species that are not expected to decline under either scenario.

Learn more about the impacts of climate change on sugar maple. Eastern hemlock and white ash are also important species in this community and both are threatened by introduced, invasive insects (the hemlock woolly adelgid and emerald ash borer, respectively).