Protected conservation lands are depicted in three layers: 1) Conservation Restrictions Areas (private lands currently protected from development through the use of conservation restrictions), 2...

Unlike western states, where public lands make up a large proportion of the landscape, the vast majority of Massachusetts is private land. Given the large number of private landowners in MA, it is an ongoing challenge to protect interconnected areas of sufficient size to support wildlife, biodiversity, and ecosystem services? for future generations. Large, interconnected conservation lands are particularly important as a strategy for adapting to climate change because the distributions of plants and animals are likely to shift and keep shifting as temperatures, precipitation, storms, sea level rise and the timing of seasons continue to change over the next several decades.

Adopt a Strategic Approach to Land Protection
Although much of the state is undeveloped, when you look at a map of permanently protected conservation land one is struck by how fragmented the landscape would be if these parcels were, in some future time, all that remained of natural habitats in Massachusetts. Much of the unprotected landscape is divided into many, relatively small parcels. A large percentage of landowners are over 60 years old and we are on the cusp of a significant generational turnover in land ownership. The challenge of producing a viable network of conservation lands that can withstand the stresses of climate change is significant.

Adapting to climate change in a way that conserves fish, wildlife and biodiversity resources will require protecting blocks of interconnected conservation land large enough to maintain self-sustaining ecosystems and viable populations of plants and animals (as well as microbes and fungi). Given the limited resources available for land conservation and the need to act quickly to protect land before it is divided into ever more fragmented ownership, land conservation organizations, agencies and municipalities will need to adopt strategic land protection programs that are nested at various scales: local, regional, statewide, and beyond.

These elements are part of a strategic approach to land conservation:
Rare Species Habitat. Biodiversity (the variety of life and its processes) is essential for maintaining the long-term integrity and functioning of ecosystems. Areas that lack natural diversity are unlikely to possess the resilience necessary to cope with the rapid changes in species distribution and ecological functions expected from climate change. A key strategy for maintaining biodiversity is to take steps to secure species and populations that are rare or otherwise at risk of being lost.

Protect Diverse and Unique Sites. The physical characteristics of a site, such as the type of soil, slope position, bedrock, and aspect, play a significant role in determining the types of plants and trees that will grow there. For example, sugar maple prefers cool, moist sites while white pine prefers warmer, drier sites. If we have a large number of diverse sites, it is likely that those diverse sites will grow diverse plants and trees no matter what climatic changes may occur. In turn, diverse plants and trees will support a diversity of habitats and wildlife. Therefore, prioritize the protection of unique sites that aren't typical of the surrounding landscape or the region (for example, an area of rock outcrops, the top of a mountain, a floodplain, or a forest that has never been cleared for agriculture). To find out if your land contains areas that were never cleared for agriculture, use the 1830s layer on the map which estimates woodlots that existed during the peak of agriculture.

Large Blocks of Habitat. Large blocks of habitat (e.g. forest, grassland, shrubland, emergent wetland) or large blocks of undeveloped land containing a variety of habitats tend to be somewhat buffered from the impacts of human activity. Some forest wildlife species are sensitive to “edge effects” and require substantial amounts of “core area” 300 m or more from adverse edges (edges where there are negative impacts). Other species are “area sensitive” and require habitats to be a certain size before they will be used. Large blocks of habitat or undeveloped land also are much more likely to retain their ecological integrity over time, resisting impacts from climate change, and allowing ecological process, like natural disturbances (floods, ice storms, wind throw) and regional wildlife population dynamics, to operate.

Corridors and Connectors. Throughout most of the state, large blocks of habitat or undeveloped land are not of sufficient size to retain their ecological integrity without corridors and connectors linking these hubs into interconnected networks. These can be especially important where remaining habitat occurs as numerous small areas rather than large blocks. Corridors are areas that facilitate animal movements and may be as narrow as a hedgerow. These areas provide opportunities for more mobile species to move from one habitat block to another. Connectors are areas of habitat that effectively link larger areas. Connectors provide intermediate habitat for less mobile species (such as red-backed salamanders, small mammals, plants) so that continuous populations can be maintained, increasing gene exchange and enhancing population viability. In some cases, it may make sense to allocate scarce land protection resources to ensure large blocks of protected habitat. In other settings, a network of hubs and connectors may be a more viable approach.

Wetlands, Water Bodies and Waterways. Many terrestrial species must have access to water. Conversely, many wetland wildlife species require adjacent upland habitat. Protection of rivers, streams, lakes, ponds, wetlands, and riparian? areas is an important element of habitat protection. Rivers, streams and adjacent riparian areas are often the only remaining habitat in developed landscapes, and are particularly important as connecting habitat for aquatic, semi-aquatic and terrestrial wildlife. 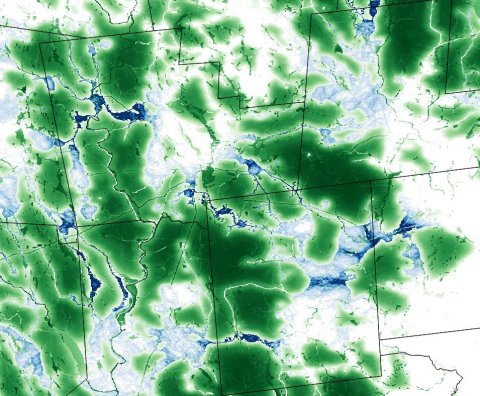 Prioritizing land protection
There is a wealth of information and analyses available for land protection agencies and organizations to use in creating an effective land protection strategy. NHESP has produced a blueprint for conservation in Massachusetts called Biomap 2 (the second generation of Biomap). Biomap 2 identifies areas with potential to support viable populations of state-listed rare and endangered species, known locations for uncommon natural communities, and land of importance for maintaining fish, wildlife and biodiversity. Sources of information used to create Biomap 2 included NHESP’s database of rare species occurrences and a landscape-based model called CAPS (Conservation Assessment and Prioritization System) developed by the University of Massachusetts Amherst (UMass Amherst).

Working with The Nature Conservancy, scientists at UMass Amherst used CAPS as the basis for the Critical Linkages project. This project identified areas in Massachusetts that were particularly important for their role in connecting other areas of high ecological integrity. The Northeast Resilience Analysis, a project of The Nature Conservancy, used information about landscape diversity and local connectedness to identify “…places that will be more resilient to climate change and serve as natural strongholds for diversity into the future.” All of these data sources are available as electronic maps that can be used in a Geographic Information System (GIS) to set priorities for land conservation.