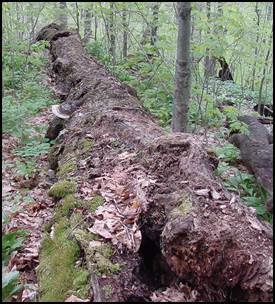 One of the biggest differences between old-growth forests and our current second-growth forests is the lack of deadwood habitats in our forests today, namely standing dead trees (also called snags) and downed dead wood (logs on the forest floor). Maintaining dead wood, both standing and fallen, provides critical and lacking habitat to a number of wildlife species ranging from small mammals to woodpeckers. Some wildlife species that use snags and logs, such as insects and salamanders, do not travel long distances. To find suitable habitat, they will need "stepping stones" of habitat across the landscape that allow them to migrate. Since deadwood is lacking in most forests, increasing the amount of snags and logs will assist in the migration of these species that play a critical role in our forest ecosystems and aren't often considered.

Not only is dead wood critical habitat, it also serves as temporary carbon storage, helping to mitigate the impacts of climate change, and returns critical nutrients to the soil. Finally, wood on the forest floor also retains moisture and can be an important habitat for seedlings of several tree species, such as yellow birch and eastern hemlock, helping to regenerate our forests.

Your forest will accumulate dead wood over time as things, such as storms and insects, kill trees. You may also speed up this process by girdling trees to create standing dead wood and by felling and leaving large logs on the ground to create downed dead wood. To protect dead wood during a timber harvest, contracts should specify that snags should be left standing and downed dead wood is not to be removed from the woods.